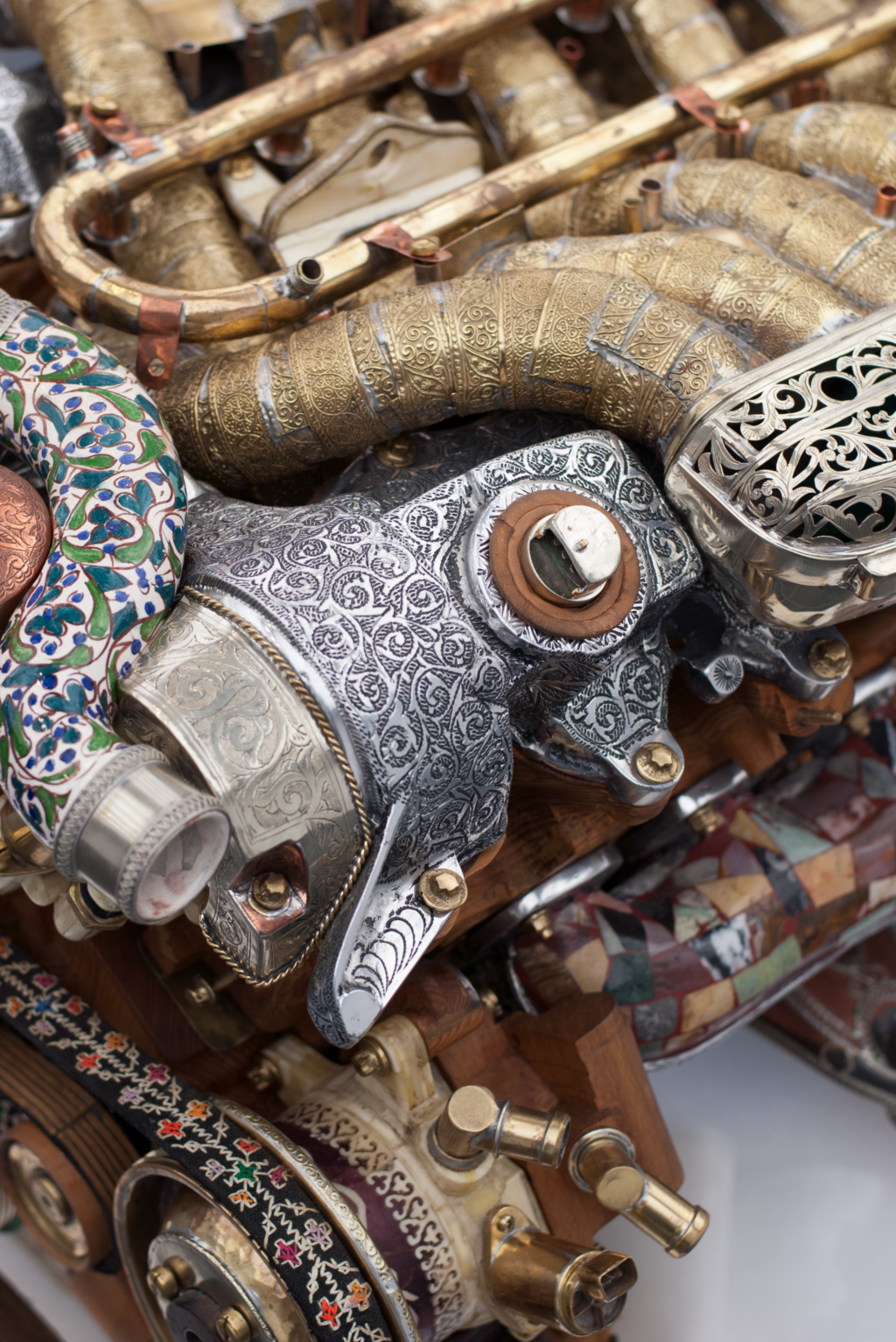 Éric Van Hove (Algeria, 1975) grew up in Yaoundé/Cameroon. He later studied at the École de Recherche Graphique [ERG] in Brussels and received a Master’s degree in Traditional Japanese Calligraphy at the Tokyo Gakugei University in Tokyo in 2005. He went on to obtain an artist PhD degree from the Tokyo University of the Arts in 2008 under the supervision of Kazue Kobata. As a result, his work combines western conceptual, post-colonial and Japanese non-dualist approaches and sensibilities. Furthermore, hoping to achieve a synthesis of such varied environments, his quest to succeed in creating the Total artwork (Gesamtkunstwerk) is a common thread in his work.

A metamodernist conceptual artist currently using the craft legacy as a medium to ponder the relevance of local and informal heritage in a highly globalized world economy, he often initiates large multidisciplinary collaborative productions which he refers to as Symphonies Plastiques (plastic symphonies), being both the composer and conductor of sculptural compositions involving dozens of people (craftsmen, engineers, etc).

In Van Hove’s work, the local and the global as well as the preceding and the impending come together through a dystopic prospective where craft, as a depository of collective memory and stratification of culture, is re-imagined in the contemporary context. At times hybridized with industry to create ethno-commodities of sort in the case of the ongoing Mahjouba Initiative, the artist merges a multitude of techniques and materials pertaining to fields usually perceived as divergent, creating works situated at the crossroads of art, design, craft and industrial engineering. His oeuvre stimulates a re-evaluation of these lores in the post-Fordist era which echoes Gropius’s Bauhaus manifesto a hundred years after, while linking tradition to innovation in a way reminiscent of the Japanese concept of Shibui (渋い) or Shibusa (渋さ). If contemporary art since Duchamp and through the advent of conceptualism has seen the deconstruction of classic aesthetical canons and the rise of conceptual beauty over plastic beauty, Van Hove’s work seems to invite a radical overhaul of these hierarchies, creating what the Japanese would call « beauty with inner implications ».

His early works up to 2012 were largely ephemeral in nature, using wanderlust, defamiliarization, psychogeography and derive. Van Hove’s interest was to bring contemporary art not only to the public space outside galleries and museums but outside of the Western context itself, producing in-situ works in over a hundred countries as a result.

In 2012, he arrived in Marrakech, Morocco to resume work on an ambitious sculptural endeavor he had prepared for years with the support of art patron Sandra Mulliez: V12 Laraki.
Following on its acquisition by the Hood museum of Arts in 2014, the artist opened a new chapter in his creative practice and founded his atelier, also known as Fenduq or Atelier Eric van Hove: a context-specific production facility and, in his own word « a living socioeconomic sculpture », from where the artist started working on « a rethinking of contemporary art’s relationship to society in the meta-modern era » involving « a renaissance of craftsmanship in the post-Fordist 21st century ».

At the time of the COP22 in Marrakesh (2016), Fenduq produced Mahjouba I, a functioning replica of a Chinese electric motorbike using local craft. In turn, this prototype grew into what the artist called The Mahjouba Initiative, a long-term project mixing African craft, 3D printing, and industrial production. Mahjouba II, a second craft-made electric motorbike prototype was made later that year. The Mahjouba Initiative is a long term on going artistic and entrepreneurial endeavour aiming to re-integrate Moroccan craft into the mainstream industry via the manufacturing of consumer goods like electric mopeds for the local market using materials and techniques from the craft sector. The artist sees it as a platform which could ultimately become a new hybrid framework where profane and sacred art practices could merge. It is premised on the idea that the Moroccan middle-class is the only meaningful market for the craft output (as of any living industry), not tourism. A fact the Covid-19 pandemic disaster has made clear. The Initiative relies on two main facts: the presence in Morocco of nearly three million craftsmen whose trade is increasingly threatened by globalization, and the Noor Power Station Project by which the North African country plans to generate 50% of its energy from renewables by 2030. The Mahjouba I prototype was nominated for the Beazley Best Designs of the Year at the Design Museum London in 2017. The Mahjouba IV prototype, the near final version, shall be ready by the end of 2020.